A slice of Americana.. an 8 foot shelf

Having deliberated good and proper.. I decided to make a start on that shelf layout (again)..

My inspiration is the real life Washington, Idaho and Montana.. bearing in mind I have been nowhere near this part of the world, I hope to capture something of the 'feel' of it.. my shortline is the Yellow Pine RR.

The layout is set in the fictional town of Dreary, Idaho, where the line now terminates.
It's the early 1980's and BN own much of the line. In Dreary the railroad services the local grain elevator 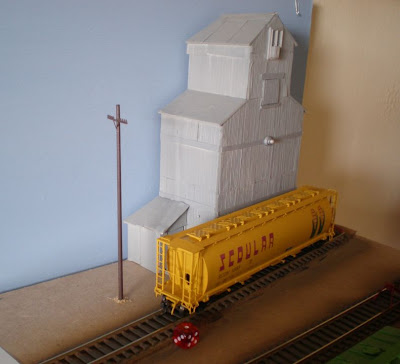 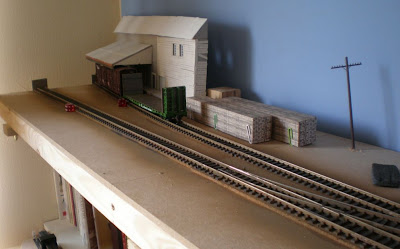 as well as a small lumber concern, collecting sawn and finished products for transit to the main BN interchange.
A lead track is also in use as a team track.
Typically traffic is light.. the 'local' Geep bringing in and collecting small 3 or 4 car trains, usually stake, bulkhead flats and full door cars for the lumber, and various covered hoppers for the elevator. An occasional box car arrives for the team track. 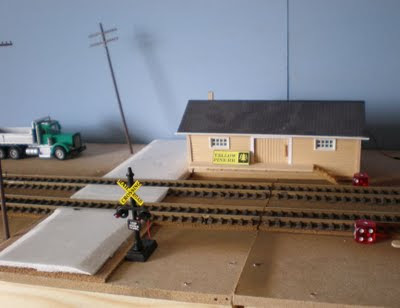 So far I've laid track and it's being 'tested' ;-) before moving on to scenics. the depot is an old wooden kit ('euromod'?), the elevator is scratchbuilt, as will be the lumber company buildings. Scenery will be sparse - Having used 'street view' around the area, I'm already thinking teddy bear fur! (Google image search 'Palouse' for some beautiful pictures). 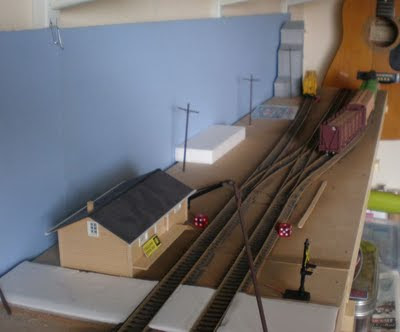 This looks really promising. I'm just starting in US outline HO too. For me, the big bonus is the wagonload operations that still go on over there - once the layout is built, waybills or dice mean that interest can be maintained indefinitely. You've probably seen it already, but just in case, can I suggest a read through Jack Hill's brilliant blog - this guy really knows what he's talking about and takes operation to a whole new level. The link is http://oscalewcor.blogspot.com/
Afraid I don't know how to make it into a hyperlink, you'll have to cut and paste the address.
Look forward to seeing this model progress.