Some dilemmas to resolve.. runaround loop or not.. modern industrial park (with limited scenic opportunities) or something more 'interesting' re structures..

At the moment my 'scrapbook' for a modern industrial zone, which will include a runaround loop for play value.. view from around Mansfield MA on Google Streetview.. 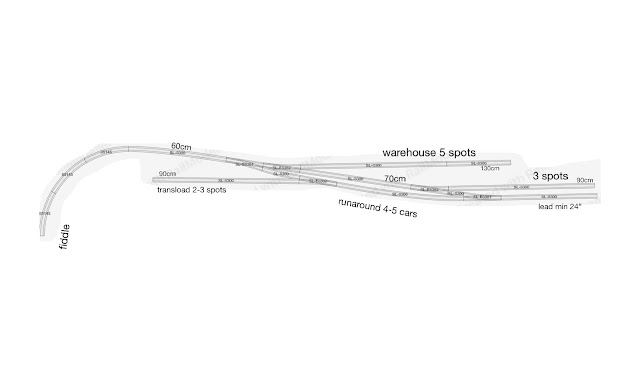 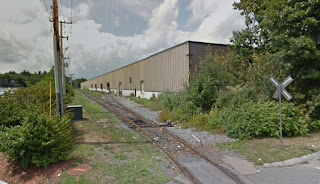 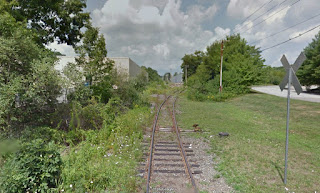 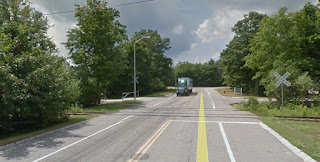 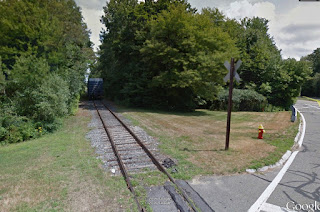 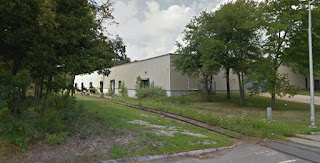 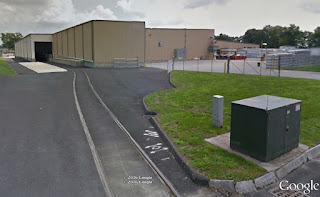 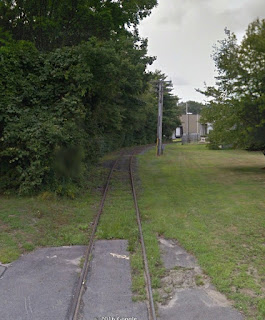 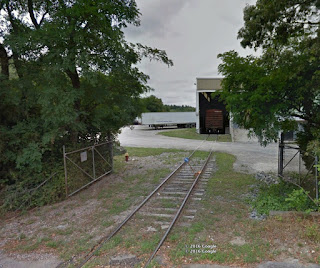 Greenville.. a new layout is started

I am in two minds about whether to continue updating this blog.. I've kind of taken to the irregular posting of videos on Youtube now. Maybe that's just lazy, it's certainly not exercising one part of the brain, as I find writing more than a couple of sentences these days to be something like hard work and reserved for job applications!

There has been some activity since my last post in June.. the Freemo rebuild is pretty much complete for now and a few of us had an informal get-together to play trains again.. big Freemo meet is due 24 September.

Big news though.. Brett has been put away and I've made a start on the replacement, using all 13 feet of the wall, plus a 90 degree stretch for a potential 'fiddle'.

It will be American HO again, and using my Yellow Pine Railroad. Primarily switching, although I haven't settled on a plan, I know that I will be resisting the urge to fill the new space with track, and will be keeping it simple and plain.. hopefully focus on the overall scene. I am drawn toward Lance Mindheim's approach in this regard.
It may seem a little 'cart before the horse' but as well as deciding on the space before the trackplan, I have already named this project.. "Greenville" 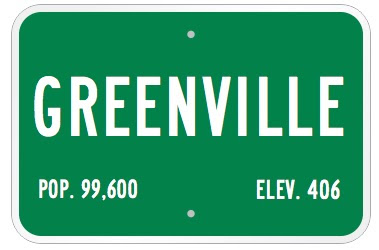 Anyway.. it feels like a bit of a cheat, but the first two entries in the Greenville Diaries can be seen here..

Yesterday I took Brett along to the TVNAM show at Armitage for my first ever exhibition. Brett was never designed for taking on the road, but my preparation paid off, in as much as it stood at a reasonable height, worked all day and didn't need any tweaking.


Very tiring, but I knew that it would be, as it is a long day on your feet, but well worth it. Great to meet up with friends, meet new people and put some faces to names.


I was well aware that Brett isn't up to the standard of modelling seen on other layouts, but everyone that stopped and watched was very kind. It was great to hear that quite a few people were already familiar with the layout via forums, this blog or Youtube. In fact, at least two people said that they had been influenced and built layouts with similar trackplans!


I had a couple of invites to other shows.. but to be truthful I'm not sure if exhibiting is something I'd want to get into 'properly' .. as interesting as it was, I think for me the social and interactive aspect of Freemo ticks a few more boxes. But I'm not ruling it out..maybe something little and new for Nottingham next year.. hmm...

Anyway, I didn't get to take many pictures sadly, but there a number of great layouts on show again - most were fairly compact when I think about it. For some reason, I didn't take any pictures of the smart Tilley Yard, or the impressive Fort Myers, perhaps the biggest layout on the day. I'll try to rectify that in September at the next big Freemo meet.


TVNAM is also a bit of a shopping trip usually - loads of great priced stock available, mostly from Anoraks Anonymous. I resisted any new locos and picked up a few more covered hoppers.

Now home I've been looking at my locos, thinking I really need to re-organise. I have a plan. No idea if it will work, but essentially I want to bring some focus to my tiny fleet.

More if it works..

Just posted the third (and final) video capturing the changes that I've made on Sheldon. Nice to play with a 12 foot run, even if it is only a 1 spur fork!

evolving plan.. (and an unrelated video about patching locos)

Trackplanner Guru Extraordinary, Jack 'Shortliner' kindly took a look at the plan and put his spin on it too.. 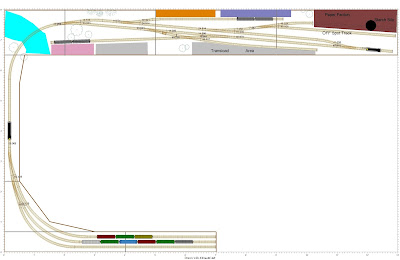 "..added a crossover and siding to Transload area - lets you move any kind of car. Changed brown factory and added paper factory with dedicated starch unload position (see Jack Hills New Castle RR blog) Tanker must be in that position for unloading - make switching difficult as tank MUST be last but one on that siding . Added point gives you extra siding for off-spot cars awaiting inbound to paper factory or outbound to elsewhere"

Definitely adds interest. At this point who knows what will end up being built, but having input from talented modellers and those with an eye for a good plan is very much appreciated.

In other news.. I just uploaded another Youtube video, showing a couple of recent patch jobs..

A couple of days off work and I've felt like cracking on with stuff. As well as setting up Brett on it's exhibition framework to check some stuff.. I've also built a couple of plastic kits for Sheldon and been busy in the garage with bits of wood.. 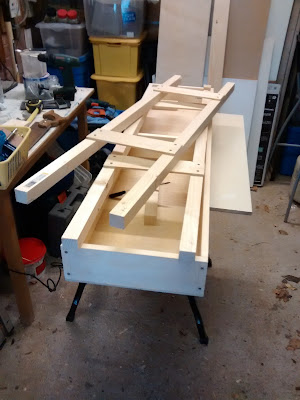 This is the 4 foot extension for Sheldon.. it's a foot wide, rather than the standard 18", as we found in our group that as long as the compatibility was there at board ends, the difference in width for these joining pieces wasn't too much of an issue. Although I ordered brackets and feet for this, they turned up today and the 50mm feet aren't going to cut it, so I've pinched the 100mm feet from my short end

It's just going to be a straight signle track run of 4 ft, providing a switch lead for the spur at Sheldon, and a bridge to the next module. If necessary, I might make up small triangle bits to match up the ends with 18" boards.

Scenically it's going to be pretty plain - fields, possibly with some fencing etc.

I've also been giving some thought to the room layout, the replacement for Brett. Pete over on RMWeb, made some good suggestions on my first draft, and I've incorporated them here.. still not the final version - that will be whatever gets actually built, but some good ideas so far. 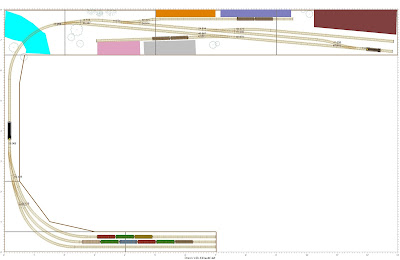 Our Midlands freemo group has 'paused' for a few months, the next meet won't be until the autumn as it stands at the moment. However, after our last meeting, I decided to make some changes to the existing modules. Sheldon and Cooper seemed a little small, with the benefit of experiencing the operations we've been able to run, I decided to;

1. Scrap Cooper. For now.. longer term I may well come back to version 2 later.
2. Use the 'Cooper' board to extend Sheldon.

The modules have taken up residence in my garage for the last few weeks as I've spent the odd evening or Sunday morning doing a bit.

I've made a point of capturing progress on video, and I'll be uploading part 2 today. They.. or I guess I should now say 'it' isn't finished yet.. but I'm quite pleased with how it's come together so far.. feels a lot more plausible.


I realise that all this has done is to extend the elevator spur by a few feet, probably allowing another three spots for switching, and also lost two further 'industries', but I think the feel of it and look of it is as important for me, and I think the pay-off is worth it. 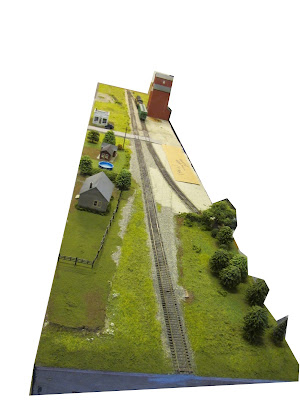 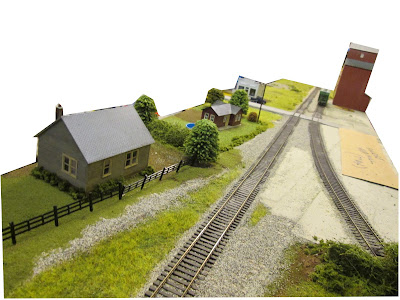 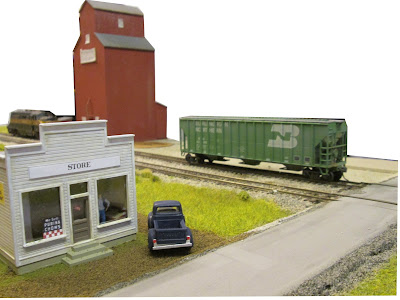 By the way..As a means of research, I've spent time browsing Google Maps and Streetview. The little town of Fairland in Indiana has been a goldmine for me. (although the houses in my Sheldon are looking a little more run down)